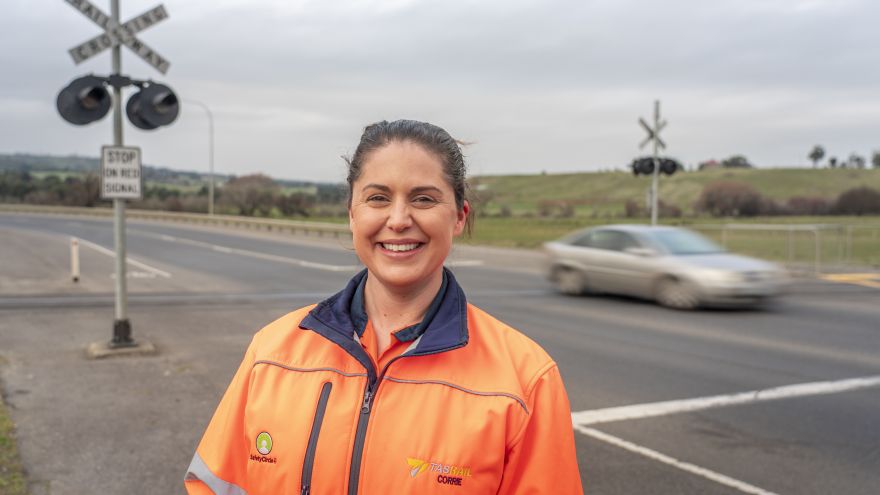 PublishedAug 12, 2020
TasRail has urged Tasmanians to remember to stop, look, listen and think when they are anywhere near the rail corridor.

This week is National Rail Safety Week. Each year in August, the rail industry combines with police and other stakeholders to raise the profile of community rail safety by targeting specific areas of concern and raising the importance of staying safe around railway tracks and trains.
TasRail CEO Steven Dietrich said that COVID-19 had added a new dimension to the rail safety message this year.
“What with changes in routine and extra distractions in everyone’s lives, we believe that it is more important than ever to remind people that TasRail is still working 24/7 to transport critical goods for Tasmanian industry and major freight forwarders,” Mr Dietrich said.
“A split second of inattention or a decision to ignore the signs and signals at railway crossings could have far-reaching effects – to motorists and pedestrians, their families, locomotive drivers and rail staff, and the broader community.”
In 2019-20 TasRail reported a 60 per cent drop in level crossing failure to stop or give way incidents.
“This is excellent news and highlights the success of some of our initiatives in the area, but it is no cause for complacency,” Mr Dietrich said.
More than half of level crossing incidents were reported on the North West Coast.
“While many thousands of Tasmanians interact with the railway on a daily basis, the majority without incident, any level crossing or trespass incident has the very real potential to cause serious harm or loss of life,” Mr Dietrich said.
“We encourage motorists in particular to remember that these are road rules, not rail rules. We work closely with Tasmania Police and other stakeholders to ensure that any offenders are caught. We also have a very active Facebook community that assists us at a grassroots level.”
TasRail Safety and Risk Management Advisor Corrie Shipton said that trespass in the rail corridor also continued to be an issue throughout the State – with almost 90 per cent of incidents being reported in the North and North West.
“Pedestrians and trains don’t mix. There is no such thing as a safe short cut through
the rail corridor,” Ms Shipton said.
“We urge the public to remember that our timetables vary to suit the needs of our
customers, and trains engines are quieter than what people think and take far longer
to come to a stop than motor vehicles.”
For further information about rail industry initiatives during NRSW go to
www.tracksafefoundation.com.au/rail-safety-week