TasRail Calls for Drivers to be Alert at Level Crossings 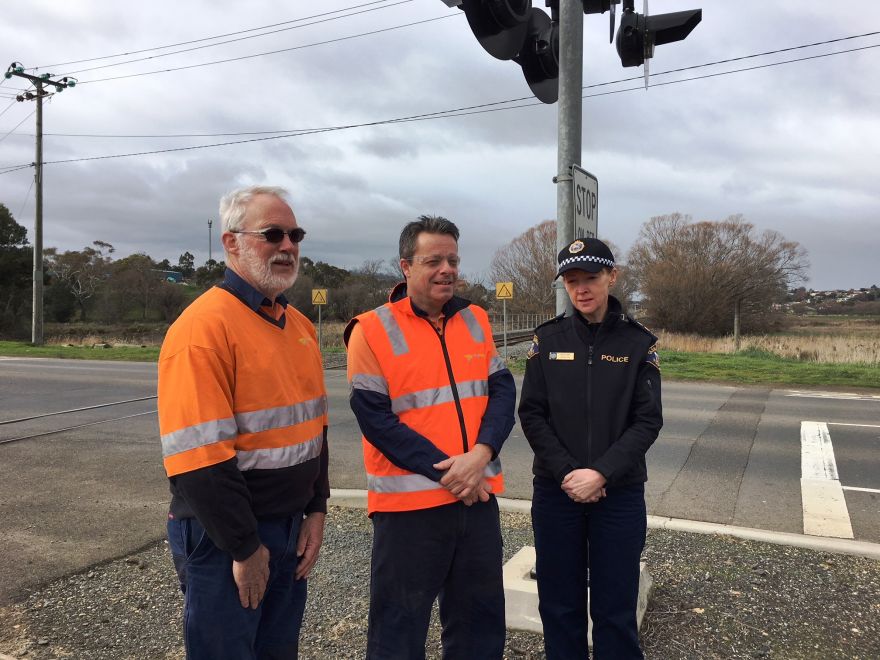 PublishedAug 13, 2018
Two recent collisions involving cars and trains have prompted TasRail to issue a stern warning to motorists to “be alert at level crossings to avoid serious injury or death”.

The caution was issued today at the launch of Rail Safety Week, an annual community awareness initiative staged across Australia and New Zealand, and in recognition of a number of recent collisions and near misses at level crossings around Tasmania.

On 24 July, a mother and two children escaped serious injury or death in Station Street, Brighton, after failing to give way to a northbound train, resulting in the locomotive colliding with the rear bumper of their car. Luckily, no one was injured.

“If our driver didn’t apply the emergency brake 3.1 seconds prior to impact, it may have been a very different story,” TasRail Chief Operating Officer Stephen Kerrison said.

“In mid June a car failed to stop at a passive level crossing on Deviation Road near Westbury, resulting in the car colliding with a train. Again the motorist was extremely fortunate to escape injury.

“And there have again been a high number of incidents involving motorists failing to stop or give way at level crossings, resulting in near misses with trains. These events are extremely traumatic for our drivers, who in most cases are unable to stop their locomotives in time to avoid a collision.”

TasRail Driver Supervisor David Payne, who spent 36 years driving locomotives in Tasmania, has been involved in dozens of near misses, six collisions and one fatality.

“You can smell the rubber on the road as the car tries to brake, you hear the sound of metal ripping and glass smashing, you see the steam flying up from the bonnet of the car and your heart is in your mouth as you know you’ve done everything you can to stop but it’s impossible to pull up a train weighing up to 2000 tonnes,” Mr Payne said.

“When you leave the train to run back to the car that has hit the train, all you want to hear is the sound of a voice calling for help as then you know they are still alive.”

Mr Payne said near misses, collisions and fatalities have a massive impact on TasRail’s drivers, their colleagues, their families and their ability to continue to work in the rail industry.

“One driver who was involved in a fatality a few years ago is still going through Post Traumatic Stress Disorder. Another was unable to step back inside a loco. And others have left the industry completely.

“If I could send one message to motorists, it would be ‘value your life and value my life’.

“Undoubtedly, if we don’t see a change in driver behaviour, there will be another death very soon,” Mr Payne said.

TasRail recorded 72 failures to stop or give way in 2017-18, compared to 76 in 2016-17. There was also one collision recorded last financial year, as there has been for the three previous years.

Mr Kerrison said it was extremely disappointing that one collision had already been recorded in 2018-19.

“We’ve seen a spike in rail corridor trespass incidents, an increase in vandalism and theft and a large jump in the number of livestock being seen by our drivers in the rail corridor. It’s time the community took rail safety serious so we can prevent the likelihood of injury and death around the rail corridor.”

“Tasmania Police will continue to work closely with TasRail and act on reports of people failing to stop or give way at level crossings, as well as those trespassing in the rail corridor and vandalising rail property,” Inspector Orr said.

“It is extremely disappointing that motorists are continuing to break the law at level crossings through inattention and complacency.”

Rail Safety Week is a joint Australasian Railway Association and TrackSAFE initiative that has been running since 2006. Rail Safety Week aims to improve education and awareness around railway level crossing and track safety, and boost knowledge about the potentially devastating consequences of not exercising caution or obeying the rules around railways.