EXCITING NEW COMMUNITY INITIATIVE TO CLEAN UP THE RAIL CORRIDOR 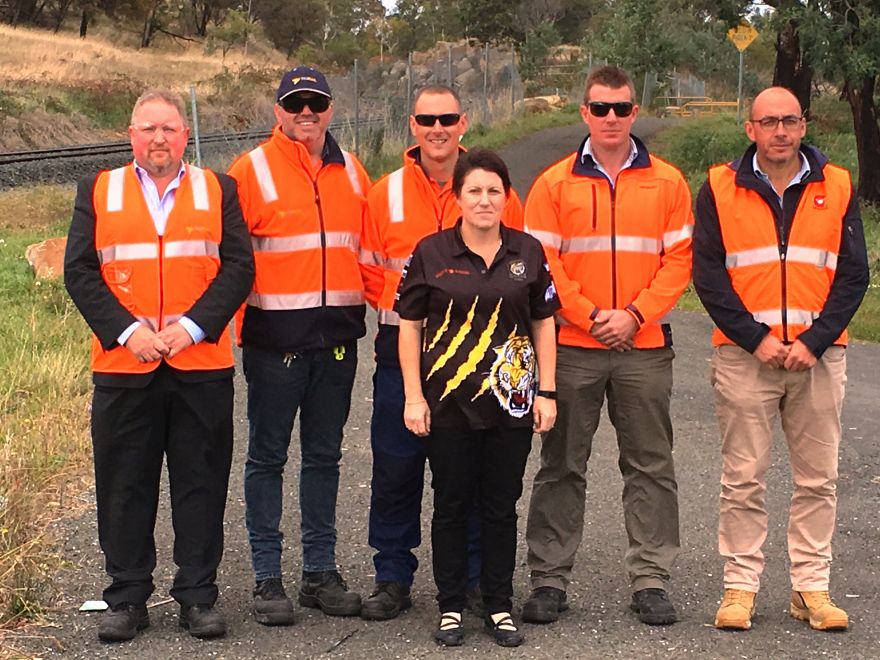 PublishedMay 07, 2018
TasRail is delighted to today launch an exciting new project focused on cleaning up the rail corridor in a bid to deter trespassers from accessing the corridor and to remove rubbish that has the potential to cause derailments.

There has been a high number of recent incidents where pavers have been thrown onto the rail from bridges, piles of timber deliberately stacked over the tracks, large boulders rolled onto the path of oncoming trains, prams dangled from bridges as a train approaches and an increasing number of trespassers putting themselves and TasRail’s locomotive drivers at risk of serious injury or death.

On Saturday 19 May, TasRail will organise the first Clean Up the Rail Corridor event through Launceston’s Northern Suburbs – with the support of key community, school and sporting groups, as well as the national Clean Up Australia Day organisation.

TasRail drivers will work with clean up volunteers to discuss the trauma involved in colliding with obstacles deliberately placed on the track, as well as trespassers that illegally access the rail corridor. The Rocherlea Football Club will be hosting a BBQ after the Clean Up. And representatives from local schools will participate in the event and also look forward to a TasRail driver visiting their schools in the near future to discuss the dangers of trespassing in the rail corridor.

TasRail CEO Steven Dietrich said the TasRail team was very excited about working with the community to clean up the rail corridor.

“All freight operations will be suspended on the Bell Bay Line while the Clean Up occurs, providing a one-off opportunity for community members to work under a TasRail leaders’ supervision to safely access the rail corridor and help clean up,” he said.

“Our drivers are fed up with having to stop their locomotives and remove a range of items, including microwaves, mattresses, cots, rocks and timber, that have been deliberately dumped onto the tracks. The people that are placing these items on the rail are illegally trespassing in the rail corridor – and are at serious risk of being hit by one of our trains.

“We hope this Clean Up event will also educate some members of the public about the trauma these actions cause to our drivers.

"We have received very positive feedback from the Australasian Railway Association and the TrackSAFE Foundation, who may extend the Clean Up the Rail Corridor concept nationally next year as part of Clean up Australia Day in March.”

Clean up Australia Day Founder Ian Kiernan said: “Communities frequently tell us that they are disturbed by the amount of rubbish they see along rail corridors, feeling powerless to do something about it.

“So I applaud the initiative by TasRail to close line sections to allow a thorough clean up,  inviting communities to join them on the journey which will see removal of accumulated litter and dumped rubbish.

“And should this pilot become a national action – we will see communities and rail workers right across the country banding together to make a real difference,” Mr Kiernan said.

TasRail’s Clean Up initiative will kick off tomorrow (8 May) when local Company Gradco utilises an excavator and several trucks to remove the heavy items from the rail corridor, such as washing machines, large rocks, heavy timber and other household goods that have been illegally dumped.

Gradco Operations Manager Danny Horton said Gradco was thrilled to support TasRail and the northern suburbs of Mayfield and Rocherlea by donating the use of its machines to assist with the Clean Up.

“Gradco has worked in the rail corridor on infrastructure projects for TasRail for a number of years and we are well aware of the dangers that result from rubbish building up in the rail corridor and people deliberately placing obstructive items on the track,” Mr Horton said.

“We hope that our Clean Up partnership with TasRail will make a real difference and ensure the safety of TasRail’s drivers and freight through this key freight corridor.”