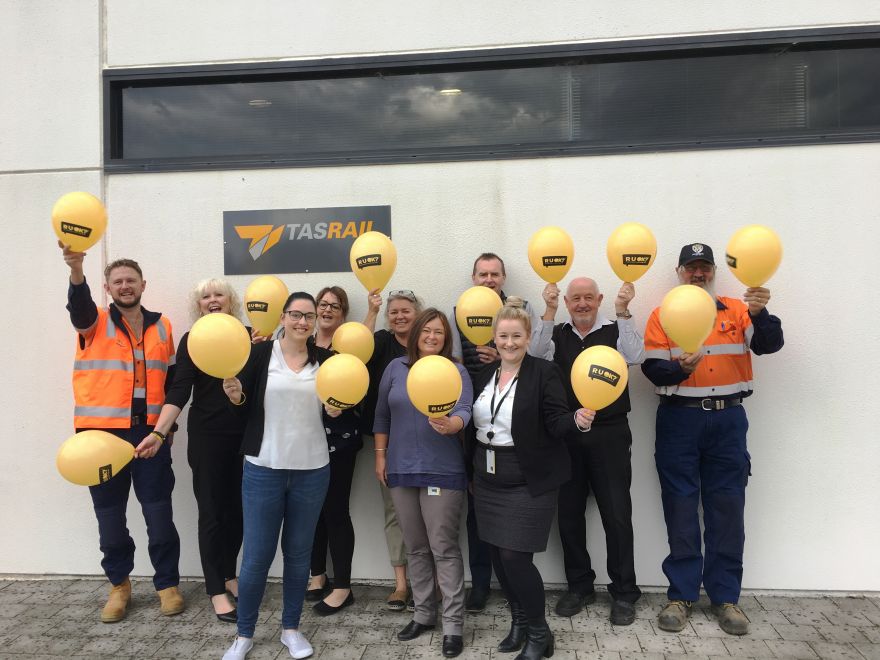 PublishedApr 12, 2018
A State-wide Rail R U OK? tour to “check in” on the health and well-being of his team is how TasRail Chief Executive Officer Damien White has chosen to spend one of his last weeks in the job.

Today is Rail R U OK? Day – a national TrackSAFE Foundation initiative that encourages rail workers to support and engage with each other in conversations about their mental health.

Mr White will spend time with TasRail employees in Brighton, Burnie and Launceston before handing over the leadership reigns to Mr Steven Dietrich, who is currently TasRail’s Chief Financial Officer, at the end of April.

He will encourage all rail workers to “join the conversation movement” through four important steps:

“One of the greatest achievements during my eight years as TasRail CEO has been leading the charge to remove the stigma associated with mental health,” Mr White said.

“From our initial small steps a number of years ago, we have developed into a more caring organisation that helps our employees in times of need. And talking about mental health issues is no longer an off-limits subject.

“Few people take a moment to consider the impact on our locomotive drivers of a 2000-tonne train crashing into a pedestrian or vehicle that has failed to stop or give way at a level crossing.

“Many drivers speak of their anguish as they realise a motorist is not going to stop and they are powerless to pull up their train in time.

“One driver shared a story of his locomotive ploughing into a car and he could see the faces and hands of two young children up against the car windows as if they were trying to stop the locomotive from hitting them.

“You can’t imagine the short and long term mental anguish that can result from these incidents.”

Mr White said while the focus of today’s event remains on inquiring and assisting those in need, he also again urged motorists to be safe around the rail corridor.

“We are fed up with the number of people who illegally trespass in the rail corridor and fail to obey level crossing signs and signals,” he said.

"They are putting their own lives at risk, as well as our drivers and the freight that we haul on behalf of our highly-valued customers.

“And we are also very aware that mental health issues can impact on anyone – not just our drivers – so our Peer to Peer Support Program is crucial in ensuring all TasRail employees are able to have a conversation or access help if needed.”

About 25 TasRail team members recently completed a two-day Mental Health First Aid course and three employees travelled to Sydney for Trauma Training, enabling these accredited workers to identify and support colleagues that may be struggling.

Mr White thanked all TasRail team members, the Company’s Shareholder Ministers, the Board and the community for their support during his term as CEO.

“Rail in Tasmania is entering one its most exciting chapters in almost 150 years and I look forward to hearing of TasRail’s ongoing success under the leadership of Steven Dietrich,” he said.