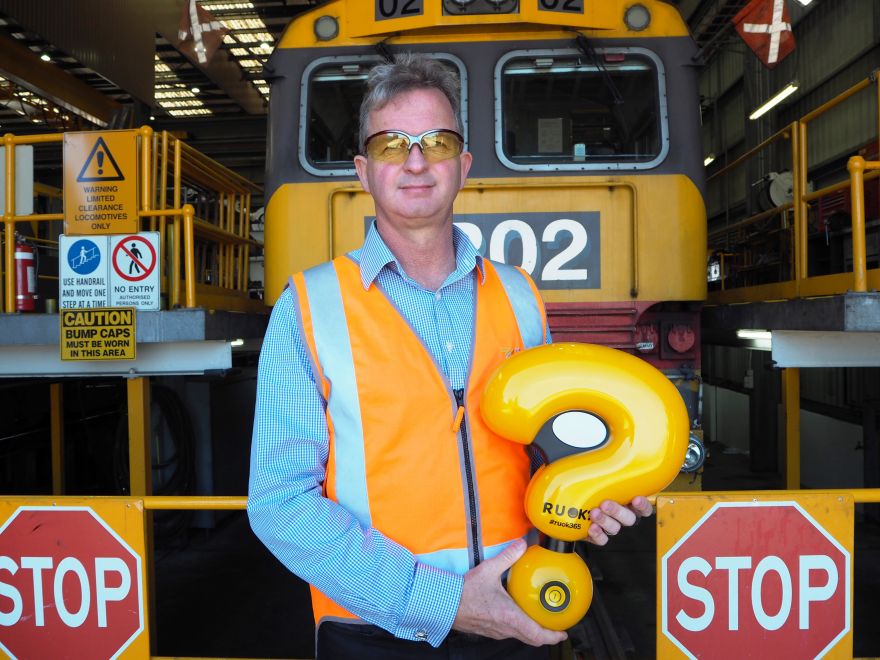 PublishedFeb 12, 2018
Quentin – an interactive Question Mark that issues conversation challenges and is about to embark on a national rail Conversation Convoy – has been launched today by TasRail.

In a bid to connect Australia’s rail employees in the lead up to Rail R U OK? Day in April, the TrackSAFE Foundation and R U OK? have kicked off the eight-week Australia-wide journey in Launceston today at TasRail’s East Tamar Workshops.

TasRail CEO Damien White said Quentin the Question Mark would also complete a trip around Tasmania this week with TasRail employees in Burnie, Launceston and Brighton set to receive conversation challenges that prompt them to positively interact with their colleagues, family and friends.

“We’re excited to have Quentin with us this week in Tasmania to encourage TasRail employees to check in with their co-workers and reinforce the power of starting conversations in the workplace,” Mr White said.

“Fostering a culture of support and encouragement is core to TasRail’s operations, especially for our drivers, some of whom have unfortunately been involved in collisions with pedestrians and vehicles along the rail corridor, whilst others are confronted with near-miss incidents on almost a daily basis.

“We also hope this focus on emotional and mental trauma will prompt the public to remain clear of the rail corridor and to ensure they stop at rail level crossings to prevent serious injury and death.”

TrackSAFE Foundation Chairman Bob Herbert AM said the national rail Conversation Convoy is a reminder for Australia’s rail employees to check in with others.

“TrackSAFE and R U OK? are connecting as many rail employees and organisations as possible via Quentin. Whether you’re a train driver, first responder or rail employee in Tasmania, or anywhere in Australia, you could potentially encounter a confronting traumatic experience,” he said.

CEO R U OK? Brendan Maher said: “We are thrilled that TasRail and TrackSAFE will be kick starting Quentin’s next journey around Australia to connect rail employees and encourage more staff to recognise the signs that someone might be doing it tough.

“Asking “are you ok?’’ can start a conversation that might be life-changing for a workmate or a loved one and we know this Convoy lead by Quentin, will encourage more rail employees to start a conversation with a colleague and check in on anyone they’re worried about,” Mr Maher said.

Rail R U OK? Day will be celebrated nationally on 12 April this year.

Mr White said TasRail was already planning a number of state-wide initiatives to coincide with Rail R U OK? Day, as part of the Company’s commitment to the health and well being of its employees.

“We congratulate TrackSAFE and R U OK? on this initiative and our employees look forward to engaging with Quentin this week as he travels around Tasmania.”

Quentin will depart Tasmania at the end of this week, and then spend time in South Australia, Western Australia, Queensland, New South Wales and Victoria.