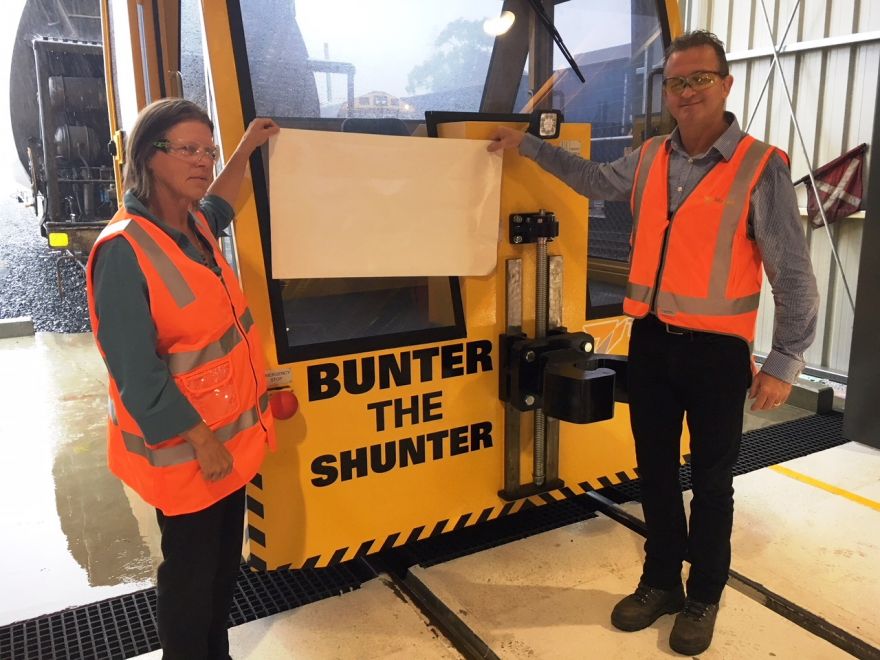 After much discussion, deliberation and debate, the judges have unanimously agreed on a name for Tasmania’s first electric shunter located in Burnie at the Underfloor Wheel Lathe facility – Bunter the Shunter.

The winning name was submitted by Sally Rossiter of Greens Beach in recognition of former Tasmanian locomotive driver Peter Shaw, who was nicknamed by his rail colleagues as Billy Bunter or Bunter. Mr Shaw died from cancer more than 10 years ago.

“This is a wonderful tribute to a man who was very passionate about Tasmania’s rail industries and I am sure he would be thrilled to be recognised in this way,” Ms Rossiter said.

There were almost 400 names submitted to the competition jointly launched by The Advocate and TasRail. The judges – The Advocate Editor Luke Sayer, Burnie City Council Acting Mayor Alvwyn Boyd and TasRail Communications Manager Sarah Hirst – shortlisted a number of entries as finalists. These included:

TasRail CEO Damien White said the response from the community had been overwhelming.

“We want to thank every person who took the time to get creative and assist in our mission to name our shunter,” Mr White said.

“The shunter is an integral component of our new Underfloor Wheel Lathe that enables us to improve rollingstock wheel wear by up to 30 per cent, re-profile our wheels more frequently to prolong wheel life and reduce the environmental and noise impact on the community.”

The Advocate Editor Luke Sayer congratulated Sally on her winning entry and said it was wonderful to recognise one of the many stalwarts of Tasmania’s remarkable rail history.

“While we had a high number of people requesting Shunty McShuntface, there was an equal number begging us not to select that name,” Mr Sawyer said. “It’s great to see the community so engaged in helping us to name TasRail’s shunter.”

“TasRail has conducted all locomotive and wagon wheel re-profiling in Launceston for the past 40 years so it’s wonderful to see this $5.5 million investment in Burnie,” Mr Boyd said.

Several of Mr Shaw’s colleagues, who continue to work at TasRail, paid tribute to “Bunter”.

“He would be absolutely chuffed that the shunter is being named after him,” an Operations Supervisor said.

“He was a lovely man. He enjoyed his job and he was very passionate about the railways.

“He started as a rail operator, then progressed to train guard and then to be a driver. He enjoyed fishing and was a great golfer. He showed great determination to fight his illness as best he could so naming this shunter after Bunter is very fitting.”