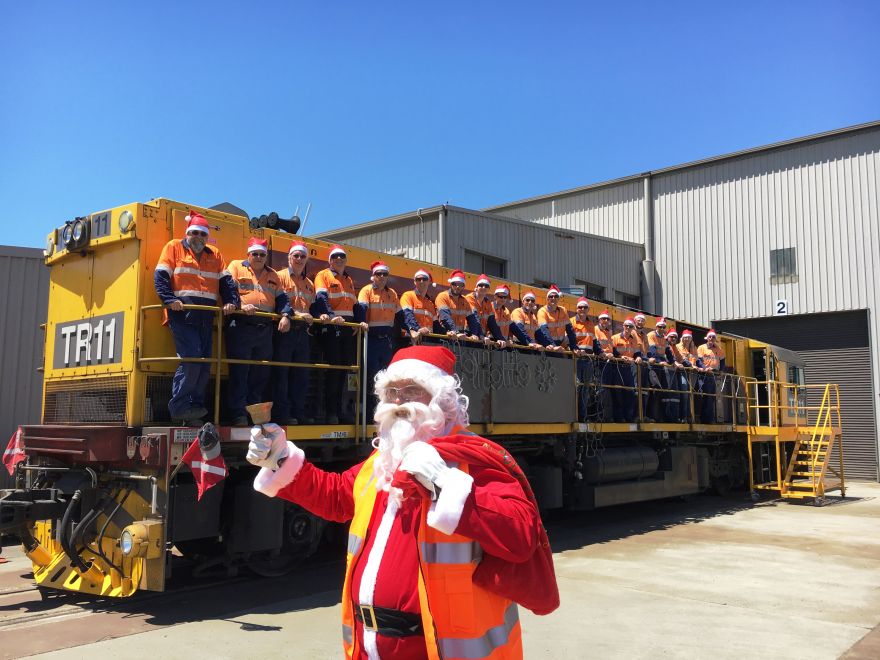 PublishedNov 29, 2017
Safety Santa will be the focus of TasRail’s 2017 Christmas Train as it traverses around Tasmania throughout December covered in festive lights and spreading Christmas cheer.

The TasRail team has been busily draping locomotives TR04 and TR11 with Christmas lights and ensuring the spare seat in the cab is ready for Safety Santa, who will assist in delivering key “be rail safe” messages about level crossings, trespass, vandalism and theft in Tasmania’s rail corridor.

Community members will be able to join the TasRail festive spirit by waving to the brightly-lit-up locomotives as the train delivers freight around Tasmania on behalf of TasRail’s highly-valued customers.

TasRail CEO Damien White said the location of the Christmas Train would be shared via regular posts on TasRail’s facebook page.

“This is a fantastic community initiative and we do hope that the Christmas Train brings endless cheer to people around Tasmania during this very busy time of year,” Mr White said.

“This year we have introduced Safety Santa, who will be perched next to our drivers in the locomotives, as a reminder of the importance of acting safely and responsibly near the rail corridor.

“On the top of our Christmas list is a request for the public to observe the key rail safety message of: “Stay alert for trains; always obey level crossing signs and signals; and stay off rail bridges and railway tracks”.

TasRail is concerned that too many people continue to illegally access the rail corridor, with recent footage downloaded from locomotives showing young children playing on the rail lines and mothers with prams on railway bridges.

“We call on all Tasmanians and tourists to observe safe rail behaviour to keep our drivers, our community and our customers’ freight safe,” Mr White said.

“It only takes a couple of minutes for a train to pass through a level crossing, but a split-second decision by a driver or pedestrian to act irresponsibly and cross while the level crossing signals are activated and / or while a train is approaching could cost them their life.”

TasRail’s Christmas Train will be operating between Burnie and Boyer six days a week from 1 December until 1 January.

TasRail urges all members of the public to adhere to Safety Santa’s “be rail safe” warnings while waiting for and watching the Christmas Train.

Subject to changes in the planned schedule, it is expected the Christmas Train can be viewed as follows: