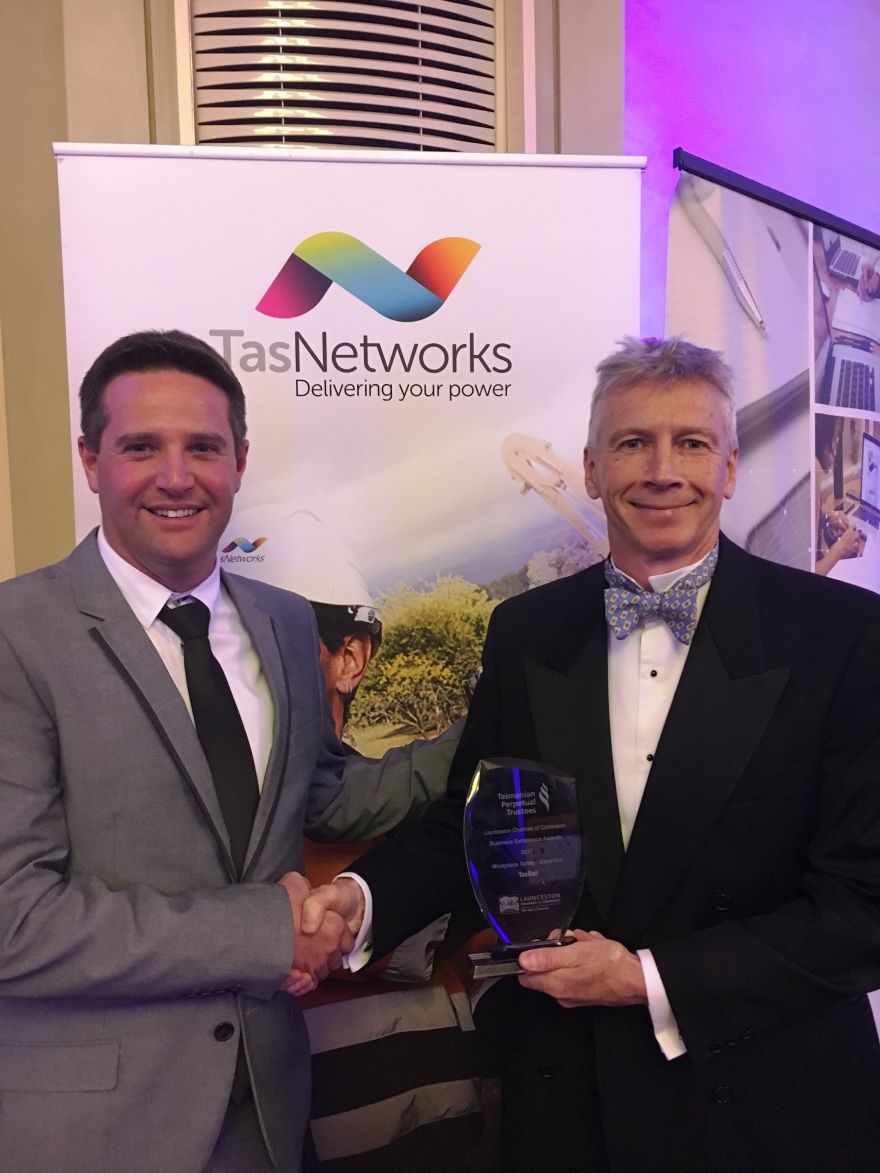 PublishedOct 30, 2017
An innovative approach to reducing unauthorised access and damage of electrical systems located beside Tasmania’s railway network has resulted in TasRail winning the 2017 Launceston Chamber of Commerce Business Excellence Award for Excellence in Safety – Electrical.

The award, presented to TasRail at the Chamber’s Annual Awards Dinner on Saturday night, recognised TasRail’s commitment to keeping its employees and the wider community safe.

TasRail conducted an assessment of its level crossings around the State to identify high/medium and low risk crossings. TasRail’s Signals and Safety teams developed a number of possible solutions, including:

• Installation of alarms on electrical equipment at high risk crossings;

• Utilisation of CCTV capabilities on locomotives to capture footage of incidents; and

• Utilisation of static cameras at level crossings to deter offenders, as well as capture footage of incidents.

Following the implementation of these strategies, TasRail recorded a 258 per cent reduction in failed safe incidents at level crossings in five years from 61 incidents in 2011/12 to 17 in 2016/17. And after communicating these measures to the public, there wasn’t a single incident regarding the tampering of signal boxes that resulted in a level crossing failure for the remainder of the financial year.

TasRail CEO Damien White said electrical safety is a key safety priority for TasRail as an electrical fault at one of Tasmania’s 106 active level crossings can result in serious injury and/or death.

“If someone breaks in and tampers with one of these electrical systems, the crossing is “dark” meaning no signal lights will operate when trains approach. As well as placing the public and the train driver at serious risk, the offender can receive an electrical shock,” Mr White said.

“It takes a locomotive travelling at 70km per hour at least 1000 metres to stop so functioning level crossing signals are vital in keeping our community, locomotive drivers and our customers’ freight safe every day.

“There is no doubt that the development and implementation of TasRail’s safety management plans, and in particular the alarms for electrical signal boxes in the rail corridor, have had a significant impact in boosting Tasmanian rail safety and improving health and safety within the TasRail workforce.”

TasRail also thanked TasNetworks for sponsoring the Safety Excellence – Electrical award, the Launceston Chamber of Commerce for organising the awards, Tasmanian Perpetual Trustees for their sponsorship of the awards and all other category winners.