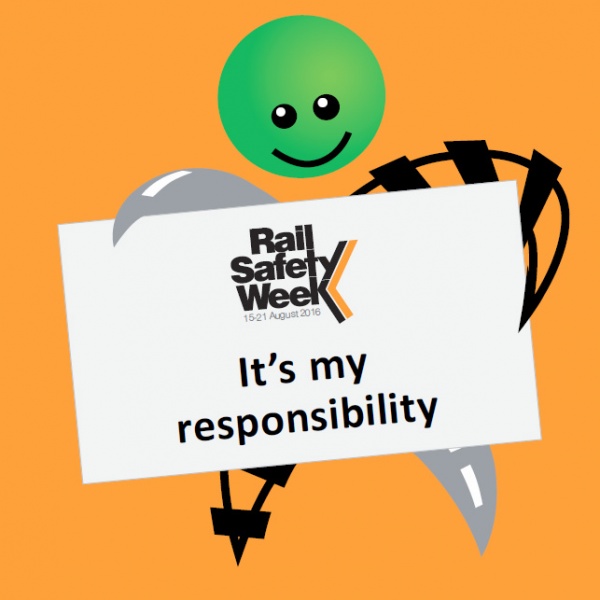 Each year in August, the rail industry comes together with police and other government bodies to promote safety at and around railways.

Under the theme - ‘Rail Safety – It’s everyone’s responsibility’- TasRail is actively joining with other rail organisations from across Australasia to positively engage with the public about this important issue that affects the whole community.

According to TasRail Chief Executive, Damien White, the objective of this year’s NRSW theme is to encourage the public to behave correctly around tracks, trains and rail assets. “Most importantly, it is designed to empower the community to accept accountability for their own rail safety by practicing the correct behaviour”, he said.

Mr White believes that if every Tasmanian made a conscious decision to act responsibly when interacting with the railway, the State could achieve zero harm across the rail network.

TasRail’s approach to rail safety is year round, but Mr White said the Company continued to implement a range of initiatives aimed at changing attitudes. He said each of the TR Class Locomotives is fitted with a CCTV camera and a trial of fixed cameras at a number of level crossing hot spots is proving an effective deterrent. The fixed cameras currently operate at two locations on the North West Coast, a region that is significantly over-represented in the statistics.

In launching NRSW 2016, Mr White announced that TasRail would be rolling out more fixed cameras, but it would now be utilising remote technology for a more timely review of the vision. “As of today, a new camera will be operating at Stoney Rise (Devonport) and we are in the process of installing another on the Midland Highway at Perth which is a residential area with a high frequency of vehicle movements including B-Doubles and buses."

By utilising a different camera technology, TasRail is planning to rotate its cameras across the rail network, with the potential for every crossing to be monitored at any time.

Mr White said the combination of inattention, poor decision making and reckless behaviour at level crossings and out on the rail network is continuing to put lives at risk in Tasmania. TasRail reported a total of 123 near miss incidents for the financial year 2015/16 where road users and pedestrians had failed to obey level crossing signals and signage when a train was approaching. This represents an almost 30 per cent increase over the previous year’s total of 94 such incidents.

“Every one of these incidents was avoidable”, Mr White said. “Every near miss event has the potential to cause serious harm. They all cause stress and anxiety to those involved, and this is particularly the case for rail employees who are entitled to go about their job without suffering what can be lifelong trauma effects”.

On a positive note, Mr White revealed that rail trespass reports had decreased by 23 for the 2015/16 reporting period with a total of 62 incidents compared to 85 for the previous financial year but he said the number is still far too high. "It's just luck that no trespasser had been struck by a train during the past 12 months, although there had been a number of near misses."

Research by the TrackSAFE Foundation confirms the issue is similar across Australia http://tracksafefoundation.com.au/client-assets/ARA04232_RailTrespass-A3_WEB.pdf

TasRail is inviting Tasmanians to participate in the campaign by downloading the sign Rail Safety – It’s everyone’s responsibility’ and taking a photo of themselves holding up their personal pledge to stay safe around trains and tracks. Photos can be posted to the TasRail facebook page at www.facebook.com/Follow.TasRail or sent on twitter using #RSW2016

Further information can be found at www.tracksafefoundation.com.au/rail-safety-week

This year marks the tenth anniversary of NRSW.