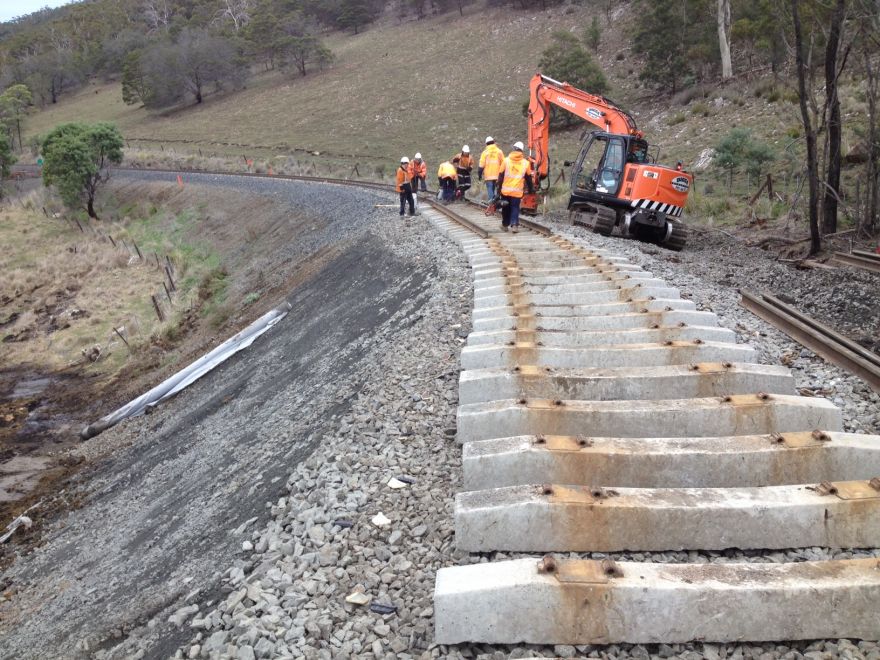 TasRail is confident that the important South Line rail freight link between Brighton and the North of the State will re-open later tonight.

The first train is due into Conara on Tuesday morning.

TasRail CEO Damien White confirms that all of the necessary arrangements are in place to support container handling operations at Conara, effectively enabling freight flows to be restored across the State’ major corridor between Brighton and Burnie.

“From a customer perspective, TasRail will continue to be responsible for the haulage of freight for its customers between Boyer and Brighton to Burnie and Devonport, Launceston and George Town”, Mr White said. “The difference is that until all of the post flood repair works can be completed, containerised freight will be on rail only as far as Conara, and then it will be transferred to truck for transporting to the Northern Ports”.

Mr White said he was incredibly proud of the effort and commitment of the TasRail workforce, saluting their efforts to minimise the disruptions to freight flows caused by last week’s devastating flood event.

“What has been achieved over the past week to re-open a number of lines and to establish interim terminal facilities at Conara is quite incredible, given the sheer volumes of water that inundated the rail network, particularly in the north and north west of the State”, Mr White said.

Mr White said the investment to upgrade and replace rail infrastructure over recent years had been vindicated. “The damage from what is generally considered one of Tasmania’s worst flood events would undoubtedly have been far worse had the investment in the rail network not occurred over the past six years”, he said.

Other restoration works underway across the worst affected parts of the rail network continued today including:

TasRail is asking the public to be aware of the resumption of rail services on the South Line and between Devonport and Railton – be vigilant for trains and always obey level crossing signs and signals.

The public is also asked to be aware that heavy vehicles and rail inspection vehicles are also operating at an increased frequency on all rail lines, including those not yet operational.

People should also stay away from the rail corridor and off rail bridges. If urgent access is required, please contact the State Emergency Service in the first instance.