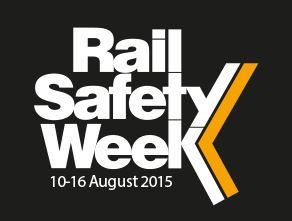 National Rail Safety Week (NRSW) starts today.  Each year in August, the rail industry combines with police and other government bodies to raise the profile of community rail safety by targeting specific areas of concern and raising awareness of the importance of staying safe around railway tracks and trains.

The theme for this year’s NRSW is ‘RAIL SAFETY – IT’S EVERYONE’S RESPONSIBILITY’.

Launching NRSW 2015 in Tasmania, TasRail CEO Damien White said this year’s theme reflected the reality that every injury or death that occurs on the rail network could be prevented if people always obeyed railways signs and signals and did not trespass on the railway corridor.

Mr White is hopeful that NRSW will encourage Tasmanians to reflect on their own behaviour whenever they interact with the railway, and to think about the example they set for others, especially children.

“Many thousands of Tasmanians interact with the railway on a daily basis”, Mr White said. “While the majority of people do so without incident, TasRail continues to report an unacceptably high number of incidents that have very real potential to cause serious harm or loss of life.

TasRail is encouraging the community to get involved in NRSW 2015 by thinking about what they will do to keep themselves, their family or other members of the public safe. For example, whenever  they approach a railway level crossing, or observe an unsafe act such as railway trespass or vandalism.

"Social media is increasingly important way for TasRail to engage with the public, so this year for NRSW we’ve created  #NRSWTasRail" Mr White said.   “We’re asking Tasmanians to tweet a photo of themselves holding up a sign pledging their commitment to rail safety, or telling us what they will do to stay safe around trains and tracks”.

TasRail will promote NRSW through a range of initiatives this week including promotional displays, billboard advertising and targeted campaigns to prevent railway trespass and vandalism.

This year marks the tenth anniversary of NRSW.